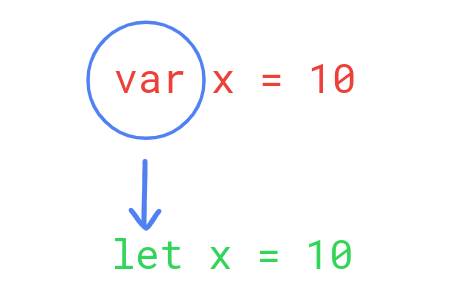 The main difference between let and var in JavaScript is:

This means you can have multiple let variables with the same name as long as they live in different scopes, such as in different functions.

In addition to this, there is a bunch of important differences, such as hoisting. These are important to understand to truly be able to tell the difference between let and var in JavaScript.

In this guide, you learn what is the difference between var and let in JavaScript. You are going to:

Let’s start by introducing variables created with the var keyword. In the past, this was the only way to create a variable in JavaScript.

In JavaScript, you can declare a variable using the var keyword.

You can then access this variable by calling its name.

But where can you do this? What if there is another variable with the same name?

To know the answers to these questions, let’s discuss the scope of this variable.

Scope of a ‘var’ Variable

In JavaScript, scope refers to accessibility.

When talking about variables, the scope means those places in code where the variable is available.

The scope of a variable created with var can be one of these two:

To understand what these mean, let’s have a look at a bunch of examples.

To demonstrate this, consider this piece of code:

As you can see, logging num2 outside of the function example() is not possible. Instead, it results in an error due to the variable num2 being defined only in the scope of the function.

Now that you understand what is a var and is its scope, let’s talk about re-declaring a variable.

Re-Declaration of a ‘var’ Variable

You can re-declare variables created with the var keyword.

In other words, you can specify a variable and then create a new variable with the same name.

For example, this piece of code creates a variable called number and then re-declares that variable with a different value:

This piece of code does not cause any issues.

However, this behavior can be an issue in specific situations.

Let’s take a look at this piece of code:

As you can see, the if statement changes the variable num permanently.

This change applies even outside of the if statement.

This kind of behavior may cause confusion.

One might expect that inside the if statement, the variable num would be treated as a different num variable than the globally scoped variable num.

This is one example of an issue caused by declaring a variable using the var keyword.

Before solving this problem, let’s talk about hoisting.

Hoisting in JavaScript means variable and function declarations are moved to the top of the scope before the code runs.

This happens because JavaScript wants to look ahead of the code about to be executed and reserve space for variables and functions.

Hoisting makes it possible to call a variable before even defining it.

For example, you probably would expect this piece of code to cause an error:

But instead of crashing, it spits out:

This happens because of what is called hoisting

Under the hood, the above piece of JavaScript code translates to this:

In other words, here is what happens behind the scenes:

To recap, all the variables created using var are hoisted to the top of the scope and are assigned a value of undefined.

The hoisting process introduces an issue that can cause headaches.

Let’s see an example that demonstrates this issue:

But in the above example name is “Charlie” to begin with.

Thus the if-check should never pass and the function getName() should always return “Charlie”.

But based on the output, this is not true.

But why is that?

Due to hoisting, the name is undefined in the line where the if check happens. This means the condition !name actually evaluates to true. Thus the if-check is passed and “James” gets assigned to variable name.

To better understand why the name is undefined, let’s inspect how the above function looks under the hood due to hoisting:

As you know, hoisting moves all the declarations to the top of the scope.

In the getName() function, this means the variable name is redeclared before the if-check and assigned a value of undefined.

This is why the if-check is passed and the name “James” is returned.

If you did not know about hoisting, this kind of behavior would be impossible to wrap your head around.

Next, let’s learn how to fix these issues with the let keyword.

The preferred way to declare variables in JavaScript these days is using the let keyword.

This became an option since ES6.

The let keyword was introduced to improve creating variables in JavaScript.

In this section, you learn why let is better than var.

The Scope of a ‘let’ Variable

The let variable has block scope.

Thus a let variable is only accessible in-between the curly braces where it’s defined.

For example, accessing a let variable outside of a block results in an error:

This error happens because the num variable is only accessible inside the if statement.

Block scoping lets you have two variables with the same name in different scopes.

Now, instead of redeclaring the num, both num variables are treated as different variables in their own scopes.

This makes let a better choice than var.

When using let, you don’t have to worry if you have used the variable’s name before.

Re-Declaration of a ‘let’ Variable

As opposed to var, a let variable cannot be re-declared within its scope.

For example, this results in an error:

As you already learned, each declaration is hoisted in JavaScript.

This applies to let variables too.

The difference between hoisting let and hoisting var is:

This means you cannot access a variable created with let before defining it:

Let’s go back to the issue you saw earlier with variables created using var:

As you may remember, this piece of code results in a somewhat unexpected output:

To fix this problem, you should use a let variable instead.

Now the if statement never succeeds.

This because because of hoisting. Now the name is not undefined. Instead, the name “Charlie” is used outside of the function as you’d expect.

As mentioned earlier, this guide would not be complete without talking about const keyword which makes it possible to introduce constants in JavaScript.

A variable declared as const maintains a constant value in JavaScript.

The only real difference between const and let is that const is immutable.

This means once defined, you can never change its value.

With this constraint, const must be initialized during declaration.

Other than being immutable, const behaves like let. Let’s talk about the scope of the const to further understand this similarity.

This means the const variable can only be accessed within the curly braces in which it’s defined.

Also, you can have many const variables with the same name in different scopes, because they’re treated as different variables.

Re-Declaration of a ‘const’ Constant

You cannot re-declare a constant in JavaScript.

For example, this piece of code causes a syntax error:

However, due to the block scope of the const, you can have multiple constants with the same name as long as they are in different scopes.

The old-school way for creating variables in JavaScript was using var.

As of ES6, there’s been a more consistent approach for creating variables using let.

Also, an ES6-way to create a constant is by using the const keyword.

The differences between var and let in JavaScript are:

Hi, I'm Artturi! I'm an entrepreneur and a blogger from Finland. My goal is to make coding and tech easier for you.
All Posts »
PrevPreviousJavaScript Array Methods: Ultimate Guide [Updated 2022]
Next‘==’ vs ‘===’ in JavaScript: Ultimate Guide [in 2022]Next