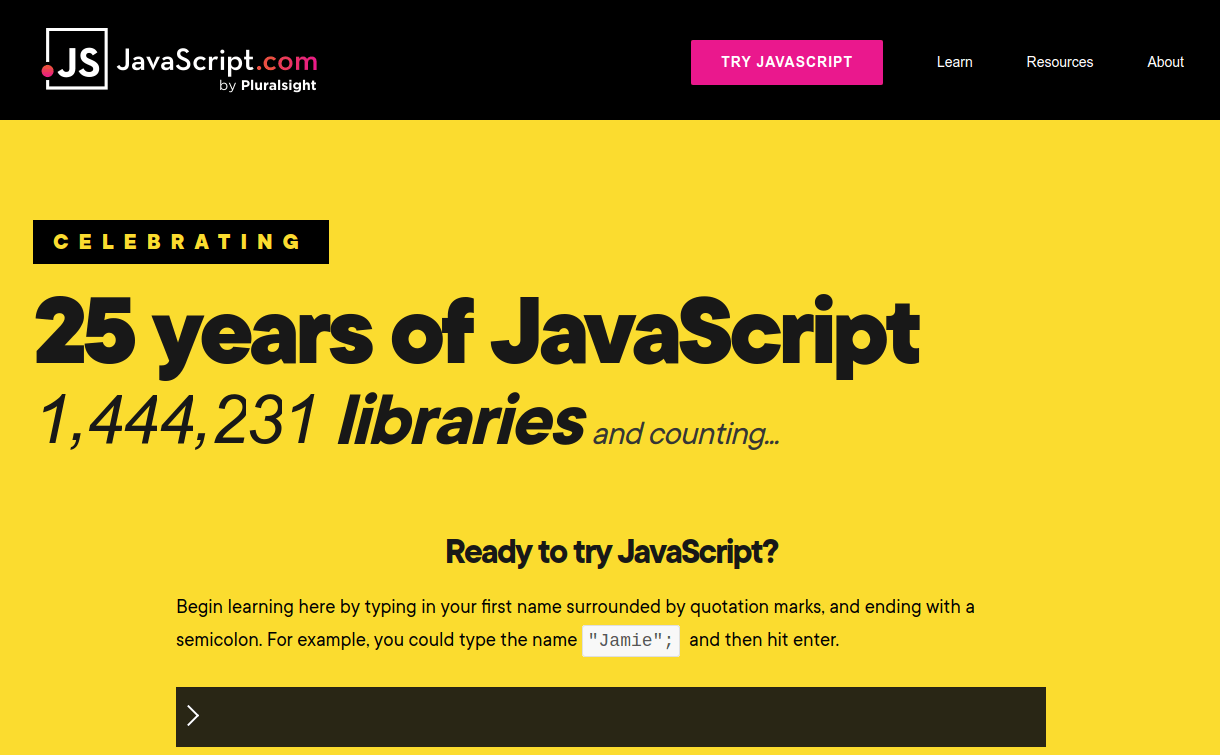 When getting started with programming and software development, the number of programming languages can feel overwhelming. Which language should I choose? What do I even want to do as a programmer?

Whether you are a complete beginner or a seasoned developer, knowing about these languages is a must! If you want to get started as a programmer, you are in the right place.

In this guide, we take a look at the 10 most popular programming languages:

Learning Python is easy because it reads like English. This makes the language quite intuitive and you do not have to spend that much time trying to understand the code. This frees up your resources to learn what programming is actually all about.

Another outstanding feature of Python is that it is a programming language that can be applied to so many things. These include:

No other programming language is as versatile as Python.

This is the simplest Python program you can create:

All this piece of code does is display “Hello world!” on the screen.

Should You Learn Python?

To see results quickly from the start, Python is a great choice. There are so many Python developers over there that finding information is easy. You will practically never face a situation where you could not find an online community with the solution to your problem.

As with other programming languages, StackOverFlow is a great site for searching for information. There are over 1 million answered questions related to Python! Chances are if you face difficulties, someone else has faced them too and figured them out from StackOverflow.

As a beginner learning how to code can sometimes feel a bit overwhelming and you may not know what you want to do as a programmer. This is because there are so many things you can do.

This is where Python stands out. It is such a versatile language that you can try almost any kind of project from game development to data mining. This is good because you get experience in different fields of programming/software development. This guides you in the right direction.

Java is also one of the most popular programming languages in the world.

Java is commonly used in Android app development or desktop applications. Other popular use cases for Java are Web Development, AI, Cloud apps, and much more.

The slogan of Java is “Write once, run anywhere”. This highlights the purpose for which Java was created. You can write a single piece of code and run it on different machines that operate in different ways.

Similar to Python, Java is a really versatile programming language. This makes it popular across all operating systems and devices. Java developers are in high demand across the globe.

What Is Java Used For

Here is the most basic Java program. It displays “Hello world!” on the screen:

As you can see, this very same program looks quite a bit easier in the Python example above. This is because each programming language comes with its own unique syntax that can vary in complexity.

Should You Learn Java?

Due to the high demand and versatility of the language, Java is something you should really consider learning!

If you have already decided to become an Android developer, then Java is something you should definitely start with. Another option is Kotlin, which will be covered later on in this guide.

JavaScript is the programming language of the web. It is used to give interaction to web pages.

Before the modern days, web pages were static pages that only contained information. These days the web pages also take information from you, the user. This was first made possible by JavaScript.

And no, Java has absolutely nothing to do with JavaScript!

Practically every web page you use these days contains JavaScript.

JavaScript has traditionally been a client-side language. This means your browser runs the JavaScript code placed on the website you visit. These days JavaScript can also be run on the server-side using the popular Node.js technology. This makes the already great language even better due to the additional versatility.

What Is JavaScript Used For

Should You Learn JavaScript

JavaScript is “still” a hot programming language to learn when it comes to web development. If you want to develop for the web, you should definitely learn JavaScript.

Keep in mind learning JavaScript alone is usually not enough to land a job as a front-end developer. You have to couple your JavaScript skills with markup languages HTML and CSS (these are easier to learn than JavaScript, though.).

Once you become fluent in JavaScript, you will surely find a job as a web developer.

This is a simple JavaScript program. It displays “Hello world!” on the console.

Kotlin is the Android app development language. More than 60% of Android developers use Kotlin to write their apps. Another popular language for developing Android apps is Java.

Kotlin is a modern programming language.

Kotlin is a syntactically compact, general-purpose programming language. It is easy to learn for beginners.

It is estimated that Kotlin makes it possible to write 40% fewer lines of code than Java.

Also, if you have previous experience with Python or Java, you can find a really shallow learning curve when it comes to learning Kotlin.

Jumping to Kotlin from the iOS world is also quite easy because it shares some common concepts with the iOS app development language Swift.

Should You Learn Kotlin

If you want to become an Android developer, you should consider learning Kotlin because it is a modern and beginner-friendly programming language. However, it is not a necessity because you can also develop Android apps with Java.

Here are some good reasons for you to start learning Kotlin if you are interested in Android development:

What Is Kotlin Used For

Initially, Kotlin was designed with Android developers in mind. However, Kotlin is expanding and it is going to be used with embedded systems, macOS, and iOS.

Here are the use cases for Kotlin:

Here is a simple Kotlin program that displays “Hello world!” on the screen:

R is a platform-independent language. This means you can run it on any operating system.

Data scientists use R for statistical computing and data visualization.

Should You Learn R

If you are into data science, then R is a great option as a programming language to learn.

R is one of the most wanted skills in the data science job markets. It also comes with a constantly growing community.

If you want to work with basic statistics, statistical graphics, probabilities, and other data analysis, then R is a great choice for you.

If you are just getting started, you should keep in mind that Python can do most of the things R does. If you are not yet sure what you want, then go with Python.

What Is R Used For

PHP is a scripting language for web development. It is used to perform the server-side actions of an HTML web page. Most of the popular websites run PHP on their servers.

PHP is also a somewhat beginner-friendly language. As a relatively easy language, PHP is one of the most popular programming languages.

With PHP, developers can build interactive parts to a web page, such as logins, comment forums, or product pages.

Should You Learn PHP

PHP is a beginner-friendly language. If you are into web development, you can consider learning PHP as a first programming language.

Also, PHP is a great choice for a freelance developer because it is used broadly used in WordPress and other similar content management systems.

What Is PHP Used For

Here is a simple PHP program that displays “Hello world!” on the screen:

Go or Golang is a young but really popular programming language developed by Google.

The syntax of Go is beginner-friendly. This makes it a good candidate as a first programming language.

Go is a multi-purpose language that is used in many different fields of software development. However, Go is mainly used for developing infrastructures, such as networked servers, or tools/systems for software developers.

Should You Learn Go

If you are interested in programming, Go can be a great first programming language to learn.

Golang has a growing community and a huge number of useful libraries developers can benefit from.

What Is Go Used For

For the past decades, C has been one of the most popular programming languages out there.

Even though C is such a popular and venerable language, it is probably not the language you want to learn as a first programming language.

Should You Learn C

C is not the trendiest language anymore. It is constantly being replaced by other languages that can do the same job with easier syntax.

If you are looking for a first programming language to learn, go with Python. This is because Python is a more high-level language than C. In other words, reading Python is way easier than reading C. This makes it possible to focus only on the relevant parts.

What Is C Used For

Swift is the language for iOS app development. It is a modern programming language developed by Apple to replace objective C.

Swift is a beginner-friendly language. Its syntax is reminiscent of Python or Ruby.

Apple is a company that is doing really well and the Swift language is easy to learn. This is a recipe for a popular programming language, which Swift indeed is.

Should You Learn Swift

If you are interested in iOS app development, then you should learn Swift.

As mentioned, Swift is a beginner-friendly language that can be easy and fun to learn.

The mobile app market is growing all the time, and the demand for well-educated Swift developers is high.

The downside of Swift is that at the moment it is not really used in any other applications other than iOS app development. Thus learning Swift without caring about mobile app development can be pointless.

What Is Swift Used For

This simple Swift program displays “Hello world!” on the screen.

C# is a programming language developed by Microsoft. C# is pronounced C-sharp.

C# was designed to be a beginner-friendly programming language that is easy to learn and use as opposed to C or C++. C#’s high-level syntax sometimes reads like English. However, high-level languages like Python are even easier to understand.

Should You Learn C#

As a first programming language, C# is only a good option if you are interested in building programs for Microsoft or if you want to build games using Unity.

As a matter of fact, Unity is commonly recommended as a starting place for game development. And the recommended programming language for using Unity is C#.

These days there is a huge demand for both game developers and Microsoft engineers. This makes C# also a good programming language to learn.

However, if you are not into Game development or Microsoft, then you should probably choose an alternative language, such as Python.

What Is C# Used For

So there you have it! A list of 10 of the most popular programming languages and what they are used for. I hope this sheds some light on your plans to become a software developer.

If you are still confused, just make sure to get started somewhere. In the end, all the programming languages work using the same principles.

Hi, I'm Artturi! I'm an entrepreneur and a blogger from Finland. My goal is to make coding and tech easier for you.
All Posts »
PrevPreviousUseful Tools and Resources for Developers in 2022
NextHow to Flatten an Array in SwiftNext