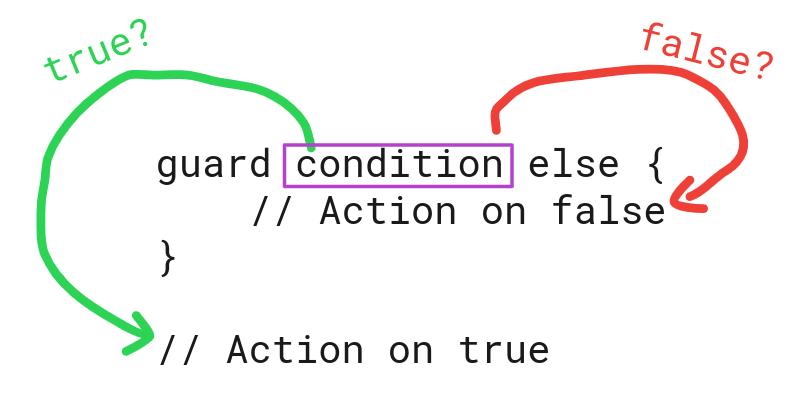 In Swift, you can use the guard statement to guard your code. The guard blocks access to critical parts of your code if a condition is not met.

The guard statement works very similarly to an if statement.

The main difference is that the guard statement is used to continue running code if a condition is not met.

For example, this piece of code continues execution if the age is 18 or more.

In this guide, you learn how to use the guard statement in Swift in detail.

After reading this guide, you know:

Let’s jump into it!

The Guard Statement in Swift

As the name suggests, the guard statement can be used as a security guard in your code.

The guard performs conditional checks to make sure the execution of the code can continue.

This is very similar to how you can use an if statement in Swift.

The guard statement follows this syntax:

Where condition evaluates to true or false and:

Notice how you need to use one of the four control flow statements (return, break, continue, throw) at the end of the guard block. This is because the guard statement is used to exit from the current scope.

Let’s see an example of how you can use a guard statement.

Example: Print Even Numbers Only

To demonstrate how the guard statement works, let’s print even numbers from 0 to 10.

First, let’s use a regular if statement:

This code works by printing numbers only if they are divisible by 2, that is if they are even.

However, you could achieve the same behavior with the guard statement.

Here the guard checks if the current index is even.

In this case, the guard block:

This demonstrates well how the guard statement works in Swift.

By the way, this is also a great example of when you should not use the guard.

Let’s see some common use cases for the guard statement in Swift.

In Swift, you can use the guard to unwrap optional values.

The guard statement works such that it:

This demonstrates what “early exit” means in the context of using the guard. The function is exited earlier than action can take place.

In this example, we use the guard to check if a property of an object is nil.

In Swift, the guard statement lets you specify multiple conditions.

To do this, separate the conditions/expressions by a comma.

By the way, you can break the line if the conditions take too much space.

In this example, we have a Person object that has two optional members.

Furthermore, we use the guard statement to make sure both members are not nil.

You already saw how to add multiple conditions in a guard statement in the previous chapter.

As you might guess, it is also possible to check both a condition and assign a let constant in the same guard statement.

For instance, let’s attach a username to a constant and make sure a maintenance mode is not on:

Notice that even though it is possible to combine multiple conditions or expressions in the guard statement, usually you might want to do them separately for clarity.

For example, if your function is supposed to throw different types of errors, you should use multiple guard statements for checking the corresponding conditions.

Similar to how you can specify a let constant in the guard-let statement, you can create a variable using var.

But this only makes sense if the variable is bound to change afterward.

If you are not going to change the variable over time, use let to create a constant instead.

As you learned earlier, a guard statement always has to end with a control flow statement.

In Swift, there are four control flow statements:

In the previous examples, you have seen how to use continue and return to transfer the control out of the scope.

Now let’s take a look at how you can throw errors with the guard statement.

In Swift, you can make a function throw an error by:

When a function throws an error, it also transfers the control out of the scope to not continue the execution of an invalid code. This is why you can combine throwing errors with the guard statement.

Let’s see an example of a function that throws two types of errors using the guard:

Sometimes in Swift, there are features that are not available for older iOS versions.

This is important to take into account not to crash the app on older devices.

Luckily, there is an #available attribute. You can use it to make a specific piece of code run only if the device’s version number is high enough.

You can combine the #available call with a guard statement.

For example, let’s stop the execution of the device in question is less than iOS 13:

You can also use the guard statement to match with enumeration cases.

Given an enumeration object, you can use the guard to check if the given case matches with the desired one.

For example, let’s create an enumeration State that represents three possible states of an imaginary machine:

Now, let’s write a function called perform() that runs only if the machine is up:

Guard vs If Statement

The main difference between guard and if statements in swift are:

The main use case difference between the guard statement and a regular if statement is in the code readability. Sometimes using an if statement can make things a bit too complicated.

For example, if a condition needs to be met for the rest of the code to make sense, you can use a guard statement.

If you used an if statement instead, you would need to put the rest of the code inside an if statement. Do this multiple times and you end up with a nested pyramid of doom.

This piece of code looks terrible.

To fix this, let’s use the guard statement instead:

Although both pieces of code work the same way, the latter one is way more manageable. This is because it is one-dimensional and readable.

Tip of the day: Start with an if statement. When everything is working, refactor the code to use the guard where needed.

Benefits of the Guard Statement in Swift

Using the guard can help you make your code more readable and maintainable.

Here is a bunch of reasons why it sometimes makes sense to use the guard:

Today you learned how to use the guard statement in Swift.

To recap, you can use the guard statement to run code if a condition does not hold.

The guard statement is similar to an if statement.

The guard statement solves the code readability issues that are present in some particular situations. In other words, a piece of code could be written in a cleaner way with the help of the guard.

A common use case for the guard to unwrap optional values and to use those values right away.

The guard statement is used to transfer the control flow out of the current scope.

You need to use one of the four control flow statements (return, continue, break, throw) to do this.

For example, you can use the guard in a function to validate values before running code.

Thanks for reading. I hope you learned something new today.

Hi, I'm Artturi! I'm an entrepreneur and a blogger from Finland. My goal is to make coding and tech easier for you.
All Posts »
PrevPrevious@autoclosure in Swift: Simplify Closure Calls [Updated 2022]
NextJavaScript Closures: An Ultimate Guide [in 2022]Next