Home » Yield vs Return in Python

Yield vs Return in Python 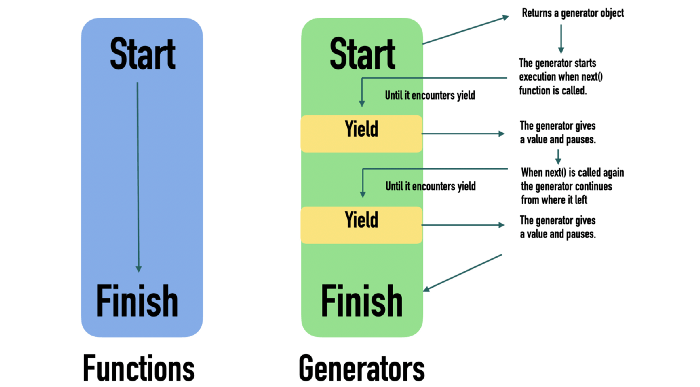 The difference between the yield and the return statement in Python is:

I’m sure this raises more questions than it answers.

Let’s go through yield in Python in great detail. Our goal is to understand why and when should one use yield over the return statement in Python.

Thus, the question “yield vs return in Python” can be rephrased as “functions vs generators in Python”.

Here is a great illustration of functions vs generators in Python:

A generator function returns a generator object, also known as an iterator. The iterator generates one value at a time. It does not store any values. This makes a generator memory-efficient.

For example, you can use a generator to loop through values without storing any of them in memory. Later on, you will find out why and when is this useful.

How to Replace ‘return’ with ‘yield’ in Python

Replacing return statements with yield statements in Python means you turn a function into a generator.

Let’s create a square() function that squares an input list of numbers. This is a regular function that returns the whole list as a result:

Let’s then convert this function into a generator. Instead of storing the squared numbers into a list, you can yield values one at a time without storing them:

Now you no longer get the list of squared numbers. This is because the result squared_numbers is a generator object.

Let’s next talk about the next() function with which you ask generators to produce values.

Call the next() Function to Yield Values from a Generator

A generator object doesn’t hold numbers in memory. Instead, it computes and yields them one at a time. It does this only when you ask for the next value using the next() function.

Let’s ask the generator to compute the first squared number:

Let’s make it compute the rest of the numbers by calling next() four more times:

Now the generator has squared all the numbers. If you call next() one more time:

This time, an error occurs:

This error lets you know there are no more numbers to be squared. In other words, the generator is exhausted.

Now you understand how a generator works and how to make it compute values.

Forget about Calling next() with Generators

Using the next() function demonstrates how generators work.

In reality, you don’t need to call the next() function.

Instead, you can use a for loop with the same syntax you would use on a list.

The for loop actually calls the next() function under the hood.

For instance, let’s repeat the generator example using a for loop:

This demonstrates the syntactical power generators have. Even though you do not store the values, you can still use the same for-loop syntax you would use on any other iterable.

Yield an Infinite Stream of Values

As you now know, the generator object yields one value at a time. It does not store any of those values.

This makes it possible to create an infinite stream of values. You can loop through the infinite stream with the same syntax you would loop a list. This is due to the flexible syntax of generators.

Let’s create an infinite generator that produces all the numbers up to infinity after a starting point:

This generator produces values from start to infinity.

Let’s loop through these values (Warning. An infinite loop):

As a result, you see an infinite loop that prints values indefinitely:

But infinite loops are bad, aren’t they?

Yes, they are. But the point is to demonstrate how syntactically it looks as if you were able to loop through an infinite collection of values.

Look at the code—you can literally write for num in infinite_nums and it works! This is all thanks to generators and the fact that they do not store values.

Let’s perform a runtime comparison between yielding and returning in Python.

In this example, there’s a list of ten numbers and two functions:

This code compares the runtimes of using these functions to construct a list of 1 million randomly selected numbers:

This shows how a generator is way faster to create. This is because when you create a list, all the numbers have to be stored in memory. But when you use a generator, the numbers aren’t stored anywhere, so it’s lightning-fast to create.

When Use Yield in Python

Ask yourself, “Do I need multiple items at the same time?”.

If the answer is “No”, use a generator.

Let’s go back to the example of squaring numbers. This function takes a list of numbers, squares them, and returns the list.

As you only want to print a list of squared numbers, you can use a generator. This is because the numbers do not depend on one another—You can square any number without knowing the next one. Thus there is no need to store all the squared numbers anywhere.

As another, perhaps more practical example, think about looping through a file with a billion strings (e.g. passwords).

There is no way you can store a billion strings into a single list. In this case, you can use a generator to loop through the strings one by one without storing them.

The best part is that syntactically it looks as if you really stored the values into a list and read them from there.

The difference between return and yield in Python is that return is used with regular functions and yield with generators.

The yield statement in Python turns a function into a generator.

A generator is a memory-efficient function that is called repeatedly to retrieve values one at a time.

The yield statement pauses the generator from executing and returns a single value. When the generator is called again, it continues execution from where it paused. This process continues until there are no values left.

A generator does not store any values in memory. Instead, it knows the current value and how to get the next one. This makes a generator memory-efficient to create.

Using generators is good when you loop through a group of elements and do not need to store them anywhere.

Hi, I'm Artturi! I'm an entrepreneur and a blogger from Finland. My goal is to make coding and tech easier for you.
All Posts »
PrevPreviousWhat Is ‘self’ Used for in Python
NextWhat Are Metaclasses in PythonNext