Home » What Is ‘self’ Used for in Python

What Is ‘self’ Used for in Python 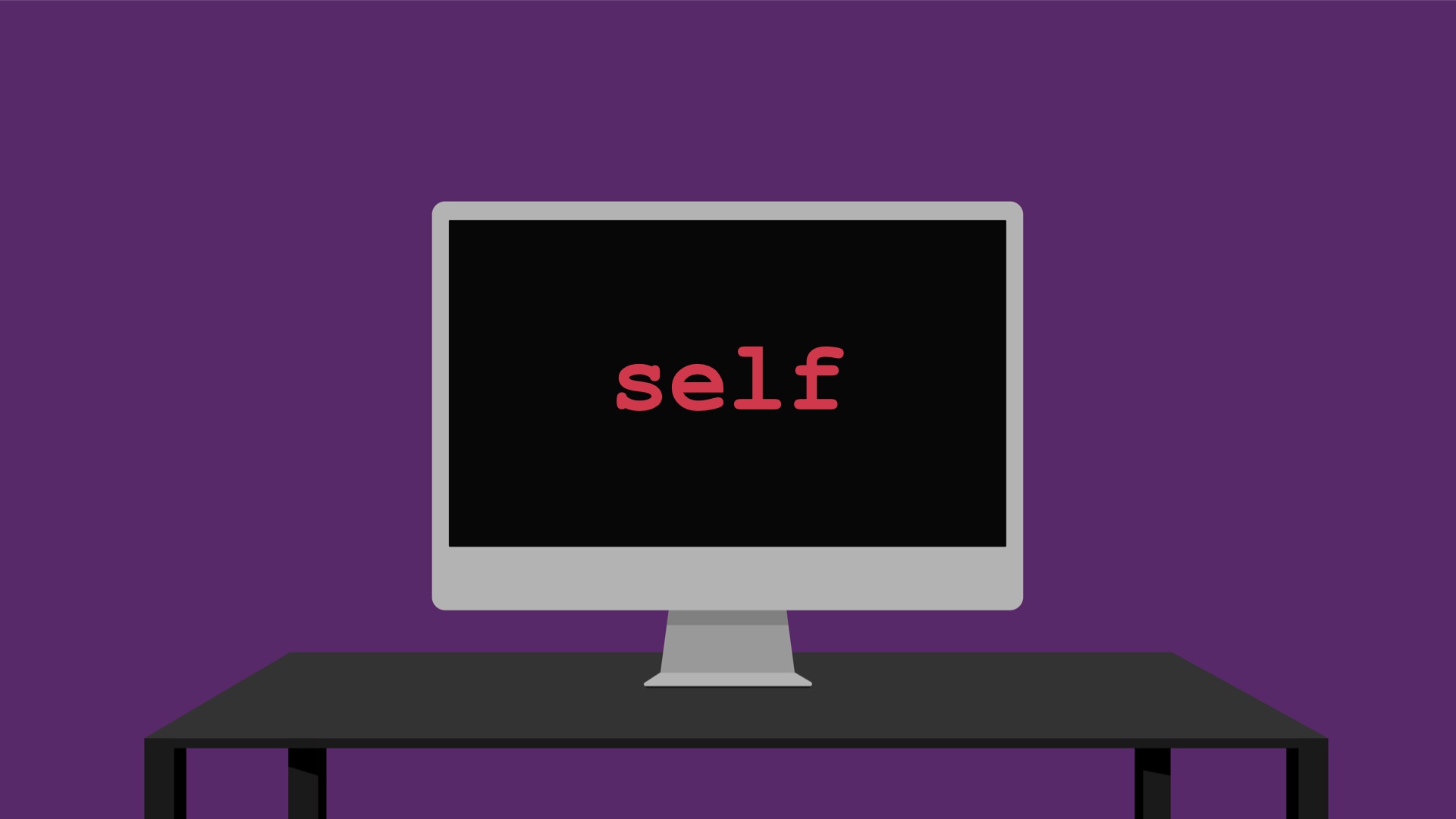 In Python, self refers to the class object itself.

With self, you are able to access the attributes and methods of the class.

For instance, this Fruit class assigns a custom name and color to itself upon creation. These can then be accessed by the info() method:

To understand how this works, let’s dive deeper into the details of self in Python.

This guide is intended for someone who already knows about classes but the concept of self is a bit vague. If you are unfamiliar with Python classes, please check this guide.

In Python, a class is a blueprint for creating objects.

Each Python object is representative of some class. In Python, an object is also called an instance of a class. If you want to create an object in Python, you need to have a class from which you can create one.

A typical Python class consists of methods that perform actions based on the attributes assigned to the object.

For instance, a Weight class could store kilograms and have the ability to convert them to pounds.

In a Python class, the self parameter refers to the class instance itself. This is useful because otherwise there would be no way to access the attributes and methods of the class.

To understand self better, let’s take a look at a simple Fruit class. This Fruit class lets you create Fruit objects with a custom name and a color:

Now you can create Fruit objects this way:

And you can show info related to them:

When you create a Fruit object, the __init__ method is called with the custom name and color. Notice how you do not need to pass self as an argument. Python does it automatically for you.

Let’s also see what happens when you call banana.info().

When you call banana.info(), Python automatically passes the self into the method call as an argument under the hood. The info() method can then use self to access the name and color attributes of the object. Without self, it would not be able to do that.

Store Anything to Self in Python

Previously, you saw how the self parameter can be used to store attributes to the objects.

More specifically, you saw the typical approach where you pass __init__ method arguments and assign them to self using the same name:

This may raise the question “Do the argument names have to equal to what is assigned to the self?”

The answer is no.

Similar to how you can create any variable anywhere in Python, you can assign any attributes to an object via self.

This means you can store any values with any names to self. They do not even have to be given as arguments in the __init__ function.

For example, let’s create a class Point that represents a point in 3D space. Let’s initialize the Point objects in the origin without asking the points as arguments upon initialization. To do this, assign x, y, and z values of 0 to self in the __init__ method:

Now you can create Point objects to the origin:

The point here is to demonstrate how you can freely add any attributes to self. More importantly, they do not even need to be arguments in the __init__ method.

A Method without ‘self’ Argument in a Python Class

To see what happens if a method in a class does not accept the self argument, let’s leave self out from the info() method:

The last line suggests that the info() method takes no arguments, but we gave it one.

If you look at the code, we never pass an argument into the info() method call.

The reason is even though we do not give it any arguments, Python automatically tries to inject self into the call. This is because Python knows all methods in a class need to have a reference to itself to work properly.

However, in our implementation of info(), there are no arguments. Thus passing self argument into it behind the scenes will fail.

So, you have to use the self argument in each method in a class.

Proof That Self Refers to the Object Itself

For the sake of clarity, let me prove that the self indeed refers to the object itself.

To do this, let’s check the memory locations of self and a Fruit object.

In Python, you can check the memory address of an object with the id() function. (Here I have simplified the Fruit class to make it easier to digest):

As you can see, the memory addresses are equal. This shows you that self inside the Fruit class points to the same address as the fruit object you just created. In other words, the self parameter really refers to the object itself.

Self Is Not a Reserved Keyword in Python

Notice that self is not a reserved keyword in Python. You could use whatever name you want to.

The only thing that matters is that the reference to the object itself needs to be passed as the first argument in any method in the class.

For instance, let’s change the implementation of the Fruit class you saw earlier. This time, let’s use the word this to refer to the instance itself instead of using self:

This implementation now works the exact same way as the one that used self.

However, self is so commonly used among Python developers that it is advisable not to use anything else. In fact, you are unlikely to encounter anything else than self when working with classes in Python.

So stick with the self argument even though it is not required!

Today you learned what self does in a Python class.

To recap, self in Python refers to the object itself. It is useful because this way the class knows how to access its own attributes and methods.

When you create an object, the __init__ method is invoked. In this method, you typically assign attributes to the class instance via self.

Notice how the self is not a reserved keyword. You could use whatever instead of self, as long as you pass it as the first argument for each method of the class. However, self is so commonly used that you should not use anything else, even though it is possible.

Thanks for reading. I hope you found what you were looking for.

Hi, I'm Artturi! I'm an entrepreneur and a blogger from Finland. My goal is to make coding and tech easier for you.
All Posts »
PrevPreviousHow to Implement a Progress Bar in Python
NextYield vs Return in PythonNext