Home » Why Is Python So Popular?

Why Is Python So Popular? 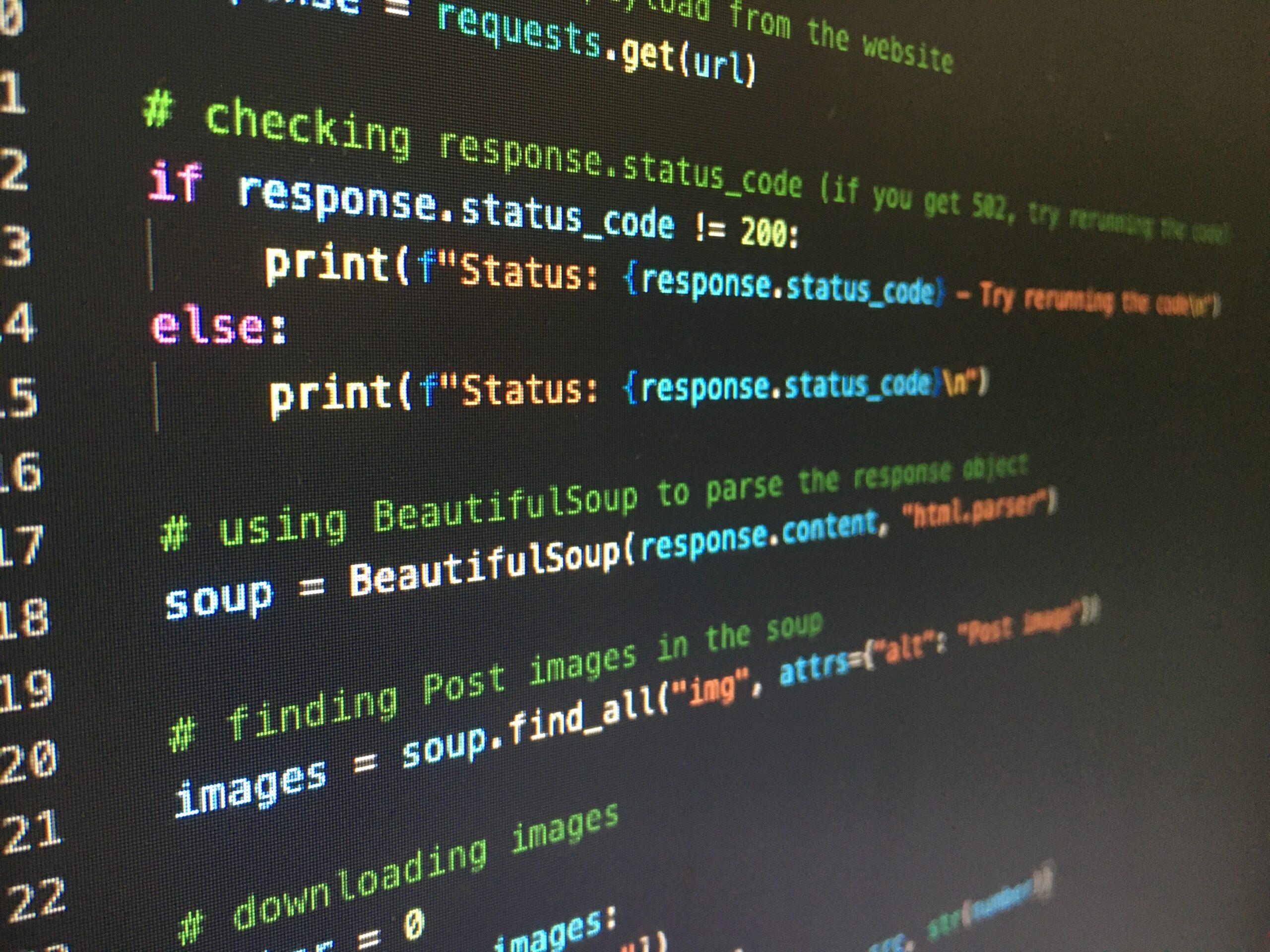 Python has been an immensely popular programming language for a long time.

This is mainly due to its easy-to-learn syntax and versatility.

You can use Python in almost any area of software development.

For example, you can work with:

This makes Python also one of the hottest programming languages in the market.

In this guide, you learn why Python is so popular programming language.

What Is Python: Introduction

It was created more than 30 years ago by Dutch programmer Guido van Rossum.

The goal of the Python programming language was to be a general-purpose language applicable to practically anything.

More importantly, the goal of the Python programming language was to reduce the complexity of coding syntax.

At this time, many other languages had and still have a really complex syntax that is hard to learn.

Python’s simplified syntax was intended to make it easy for anyone to start coding.

Python has been widely successful in achieving the above goals. Even 30 years after the first stable release, Python is still ruling the programming world.

Python has been widely successful in achieving the above goals.

These days, Python is used in almost every field in software development, from automation scripts to full-on software like websites or games.

In this guide, you learn different reasons as to why Python has become so popular programming language.

Python is commonly recommended as the first programming language to learn.

Python is easy to learn because of its English-like syntax.

Even if you had never coded before, you would probably have some idea what the piece of code below does:

Thanks to its simplified syntax, Python is much faster to learn than almost any other programming language.

Python is a general-purpose programming language.

In addition to being easy to learn, the language is really versatile.

You can use Python in almost anything, such as:

As you can see, there are lots of buzzwords on the list.

Python is applicable to the most in-demand computer science skills.

If you are in doubt as to which programming language to learn, consider Python.

You can do practically anything with it. Better yet, it is the easiest language to get started with.

Due to its popularity, Python has also one of the biggest and most supportive developer communities out there.

If you are not familiar with programming, you do not know how much time developers spend time looking for answers on the internet.

Regardless of your programming skill level, you are going to use Google a lot.

Once a developer encounters a language-specific issue, they tend to ask the community.

Needless to mention development would be really slow without being able to look up answers quickly from the community.

On Stack Overflow alone there have been almost 2 million Python-related questions. Out of these questions, a whopping 1.3M questions have been answered.

Python is also a somewhat old language. It was created over 30 years ago. This has made it possible for the development community to mature well.

These days you can find Python-related support whether you are a beginner or an expert.

You can search for help on:

Each of these platforms has a ton of helpful Pythonistas ready to share information with you.

Also, there are many bootcamps and courses for those who want to become job-ready developers in a matter of months.

Python has great libraries and frameworks for solving problems.

If you are new to programming, let me explain why this is important.

Given a programming language and a code editor, you are not going to go far. The idea of programming is not to reinvent the wheel and implement everything from scratch.

Instead, you build the programs using pre-built components. In Python, these components are called libraries and frameworks.

These consist of useful code you can reuse in your programs.

Some common frameworks and libraries in Python include:

Let’s briefly introduce these to give you some context.

NumPy is a popular data science library for Python.

It is used to perform mathematical operations on arrays.

NumPy library comes with powerful data structures with guaranteed efficiency in calculations with arrays and matrices.

It also supplies a huge collection of useful mathematical functions for operating on these data types.

Matplotlib is a plotting and visualization library.

It is commonly used in Python in general and then of course with the previously introduced NumPy library.

Matplotlib is a great tool for visualizing data.

You can draw all kinds of plots with Matplotlib’s built-in functions.

SciPy is a popular scientific computing library for Python.

The SciPy library consists of useful algorithms built on top of the NumPy library.

If you are familiar with linear algebra, you can use SciPy to figure out:

Python is a versatile language. You can even use it to build a website.

But this is not possible using native Python. Instead, you should use the popular website framework called Django.

With the help of the Django framework, you can build fully functional websites of almost any kind.

Generally, it is important to be able to get data from a website programmatically.

Python is also capable to do that.

With the help of the BeautifulSoup library, you can pull data out of HTML and XML files from the internet.

This is useful in many ways.

For example, in data science, you can scrape numeric data behind a URL.

To keep it short, we are not going to introduce more Python libraries or frameworks. However, there are literally thousands of them out there.

To automate manual work with a computer, you can write small automation scripts.

Unfortunately, completing even a small task can require a lot of work.

This is not optimal.

With Python and the great number of libraries and modules, you can automate almost any repetitive task quite easily.

This frees up resources to be used in the issues that really matter.

Python has become an industry standard of automation.

Some developers that work with a language other than Python still use Python for their automation scripts.

If you do not know what the automation script means in this context, here is an example.

Imagine you have a PDF document or a bunch of them and you want to convert them into audio for someone to listen to.

This is where you can write a small automation script.

Using other programming languages to do this might be tricky or not even possible.

However, due to the great Python libraries, this is such an easy task to automate.

Even if you do not understand code, here is how simple it looks like:

6. Python Works with the IoT

IoT or the Internet of Things refers to small and low-power devices connected to the internet.

Due to the versatility and flexibility of Python, you might not be surprised to learn that Python is heavily involved in the IoT market.

You can control all of these devices with Python and its IoT libraries.

You can for instance write code to send and receive data over Bluetooth and the internet.

Due to limited capabilities, some of the IoT devices support MicroPython.

MicroPython is an efficient subset of the Python 3 programming language. It is designed to run on IoT microcontrollers to save resources. Even though MicroPython is a subset of Python, it still gives you the benefits of Python.

So far you have learned that Python programming is both easy to learn and in high demand.

For this reason, it is commonly the first programming language students want to learn.

This means more and more people start learning Python which makes it even more popular.

8. Python Is Used in Academics

In the academic world, Python has become the go-to programming language.

This is because Python has a huge number of applications in the most high-demand computer science skills out there.

Python is widely used in the popular areas of software development, such as

Most of the university courses in these topics are taught entirely using Python.

When a programming language is used by a big tech company, it is going to become even more popular and trusted.

Great examples of this are:

Python programming language is backed up by authorities, such as:

For instance, Google has been using Python rigorously since 2006. They even built a Python course for aspiring developers.

Of course, there are lots of other authorities using Python and the list is growing constantly.

Today you learned why Python is so popular programming language.

In short, Python is a general-purpose language that is easy to learn and use.

Due to its popularity, there is a big and helpful community.

Python is suggested as the first programming language to learn due to its English-like syntax.

Hi, I'm Artturi! I'm an entrepreneur and a blogger from Finland. My goal is to make coding and tech easier for you.
All Posts »
PrevPreviousPython How to Join a List of Strings
NextBest VPNs for Software Developers: Top 10 ListNext