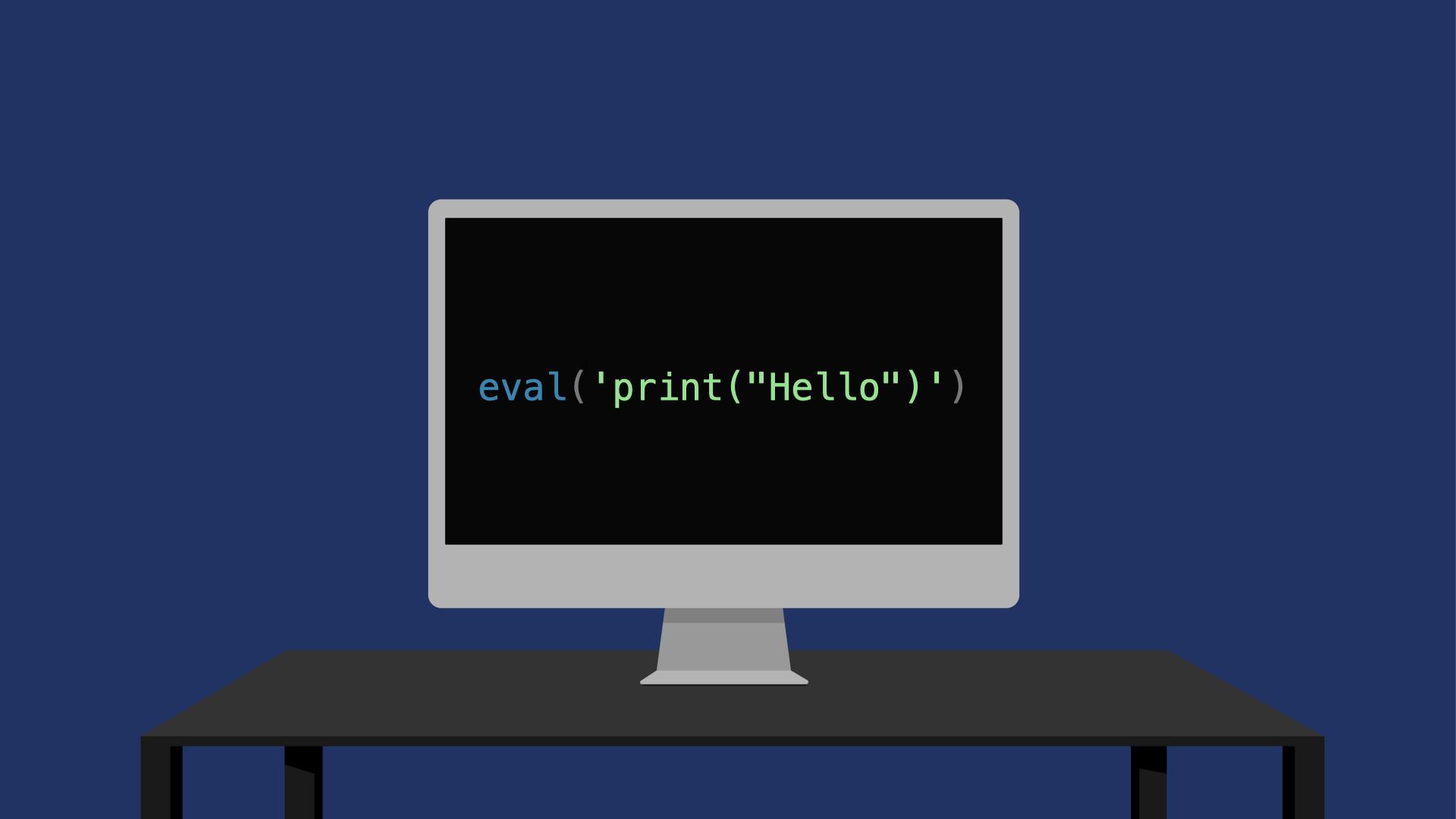 In Python, the built-in eval() function runs an expression passed as string argument to it.

As you can see, this does the exact same as:

The eval() function can be useful in many ways. However, it is important to understand it poses a big security risk in your application. This is because it also allows users to run hazardous expressions.

In Python, the eval() function is used with the following syntax:

To understand what these mean, let’s have a look at the three arguments in more detail.

When you call the eval() function, the expression argument is turned into Python code and gets executed.

Here are some examples of calling the eval() function on string-based expressions:

Notice that the eval() function does not work with statements such as the if statement or a for loop.

For example, let’s try a basic if statement in an eval() function call:

This results in a SyntaxError.

So you cannot use statements like def, class, if, while, for, import in the eval() function call.

Also, it is not possible to assign values in an eval() function expression.

As you can see, this also results in a SyntaxError. The reason why the assignment is not possible is that an assignment is a statement rather than an expression. And no statements are allowed!

The globals argument is a dictionary that maps the accessible variable names to the actual variables that the eval() function can then use.

For example, let’s specify a variable name and add it to the global namespace of the eval() function:

As another example, let’s see what happens when a variable is left out from the global namespace:

As you can see, this results in a NameError that complains about trying to use an undefined variable. If you take a look at the code, you can see that only x was added to the global namespace. Thus y is not available in the expression “x + y”.

You can also define the global namespace directly into the dictionary. This happens by specifying the variable names as the keys and the values as the values.

If you do not pass the globals argument at all, the eval() function defaults using the current global namespace of the program.

Each Python function has a local scope and namespace. This means variables defined in the function are only accessible inside that function.

In Python, the eval() function is a built-in function that is implemented somewhere under the hood. It has its own local scope that you cannot directly modify from outside.

In practice, the locals work similarly to the globals.

To specify the locals dictionary into the eval() function call, you need to also have the globals present. It can for example be an empty dictionary.

For instance, let’s define two variables and add them to the local namespace of the eval() function.

As another example, let’s directly define the local variables into the locals dictionary:

Similar to globals, if you do not insert a variable into the locals but try to use it, you get a NameError:

Now you understand how the eval() function works and what parameters you can pass to it.

When Use eval() Function in Python

But why would you ever use the eval() function to begin with? Why wouldn’t you just run expressions as-is?

The main use case for the eval() function is to run dynamic expressions that would normally require more lines of code and efforts.

For example, let’s say you are building a calculator app where a user enters mathematical expressions and the calculator calculates the answer. It would be quite a challenge to cover all the possible user inputs with if-else statements or pattern matching techniques.

This is where the eval() function comes in handy. You can directly evaluate the user’s mathematical expression to get the answer.

So you only need three lines of code to make a very basic calculator in Python.

However, using eval() blindly like this can pose a serious security threat to your application.

In the next section, you are going to learn why eval() can be hazardous and what you can do about it.

The eval() function poses a security threat to your application if not handled with care. This is because it allows users to run potentially hazardous code in your application.

Generally, using eval() is against best practices because you cannot know in advance what code is going to be run. However, if you need to use the eval() function, please take the time to learn how to take precautionary measures to minimize the risks.

Restrict the globals and locals

You can place restrictions on the global and local namespaces of the eval( ) function with the optional globals and locals arguments.

For example, to restrict access to the global and local scope of the caller, you can pass empty dictionaries to the eval() call.

For example, let’s say there is a secret user ID in the caller’s global scope:

If a malicious user guessed there is a secret user ID in the scope, they could expose it by entering the userid as an expression in the program:

As you can see, it is this easy to read a secret value from the program.

A security measure to take is to restrict access to the local and global scope. This happens by specifying the globals and locals parameters as empty dictionaries.

Here is an improved version of the above code:

Now, a malicious user fails to obtain the user ID as the access to the global namespace is restricted:

Even though this patches the problem in hand, there are other bad things an adversary could do, such as using the built-in modules and libraries.

Even with empty globals and locals, it is still possible to access any standard library or third-party module installed on the system that runs the app.

This is possible because when you call eval() with empty globals, a __builtins__ reference is automatically inserted into the globals dictionary. This makes it possible to use any modules and libraries.

This security hole makes it possible to for example run the following hazardous command in the calculator app (do not run this on your machine!):

This deletes every file in the application’s current directory.

For example, let’s try to use the math module to calculate the square root:

Unfortunately even this is not enough to prevent a user from running unwanted code in the app. There is still a quite simple trick that an adversary can pull out to go to unwanted places.

In the next chapter, you learn how to restrict names that can be used in the expression when calling eval(). This prevents adversaries from accessing classes in Python.

Even with strict restrictions placed on the global and local namespaces in the eval() function call, a malicious user can still do tricks to access unwanted parts of the code.

Now, let’s go back to the calculator app we already protected to some extend.

As you can see, a malicious user can still go to places we don’t want them to go. But now they can only list the names of the class. Could they actually use them too?

Yes, they can. Easily.

For example, let’s demonstrate how a user could call range to create a range of numbers with the help of the list that contains all the classes:

Although this particular action is not dangerous it demonstrates how easily an adversary could perform dangerous actions.

But what can you do to prevent users from accessing the list of classes?

One way to tackle the problem is by specifying a dictionary of allowed names that can be used in the expression.

To make this work you need to follow these four steps:

Here is an example of a function that implements the above steps to allow only calling the round() function. (It also implements the previously learned safety measures too):

Now you can replace the eval() function in the calculator with eval_strict:

This succeeds because we allowed using round(). However, let’s try another run where we try to use the abs() function:

As you can see, this fails because the abs() function does not belong to the list of accepted names.

By the way, if you do not want to allow any names to be used at all, leave the allowed_names dictionary empty in the eval_strict function implementation.

Today you learned the basics of the eval() function in Python.

To recap, the eval() function evaluates the expression passed as a string argument to the function.

Using eval() can be useful if you want to run expressions dynamically in your program, such as building a calculator app.

However, using the eval() function can be dangerous without proper security measures. This is because it is possible to run hazardous expressions in the application.

Hi, I'm Artturi! I'm an entrepreneur and a blogger from Finland. My goal is to make coding and tech easier for you.
All Posts »
PrevPreviousThe __repr__() Method in Python
NextPython Linter – Auto-Format Your CodeNext