Home » Python How to Print on the Same Line

Python How to Print on the Same Line 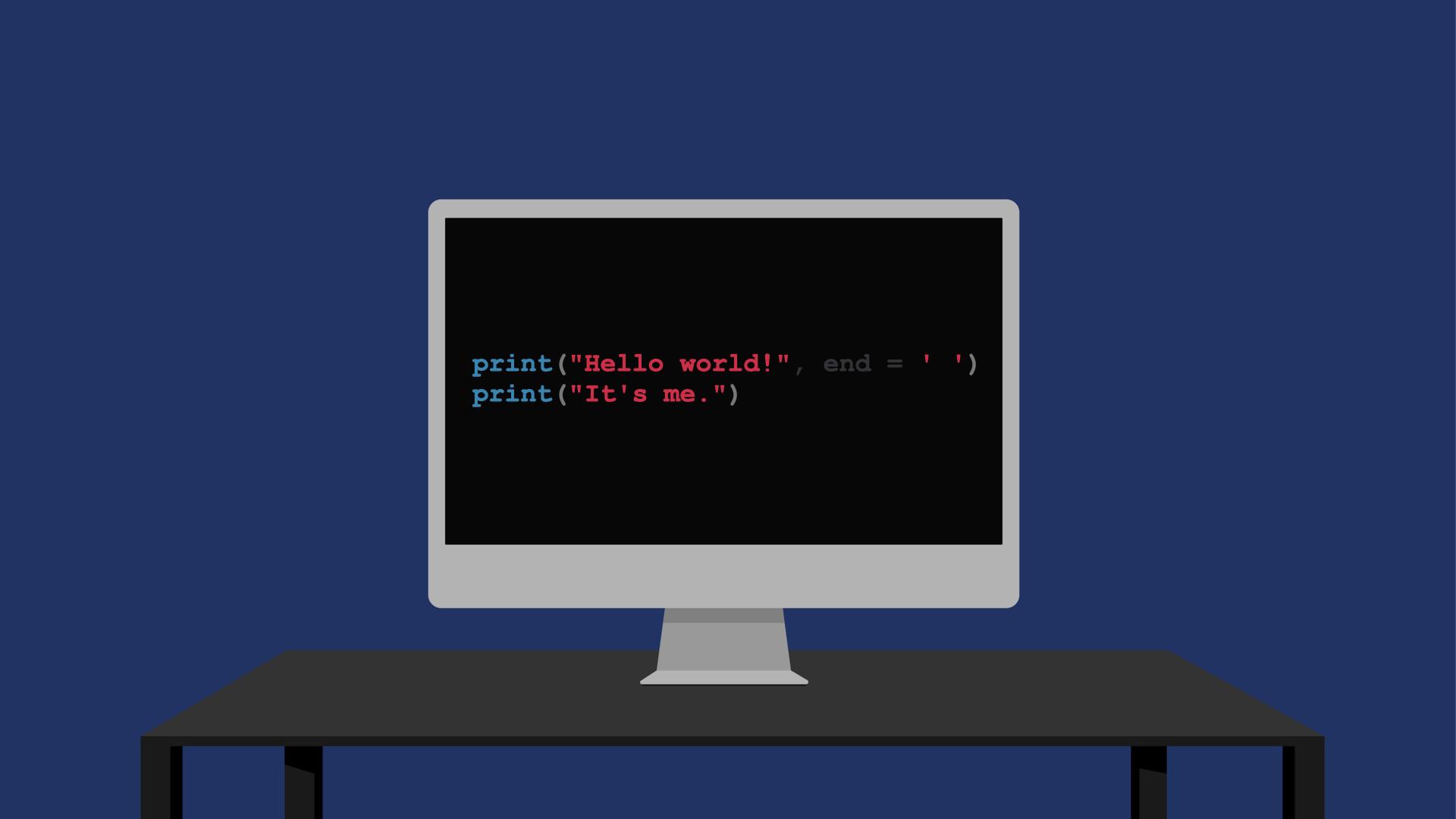 To print on the same line in Python, add a second argument, end=’ ‘, to the print() function call.

However, if you want to understand how this works, I recommend reading further.

When writing a Python program, you commonly want to print stuff on the screen.

This is useful if you are debugging your program or testing how it works in general.

However, sometimes this is not what you want.

In this guide, you will learn how to print on the same line in Python in a couple of easy ways.

Let’s briefly discuss strings before getting there. If you are a beginner, it is worthwhile to recap strings.

What Is a Python String

A Python string (str) is a common data type used to represent text.

To create a string, wrap letters or numbers around a set of quotes.

You can use either:

Here are some examples of strings:

You can use both double quotes and single quotes when creating strings in Python.

If you want to quote a string, you need to use one as the outer string and the other as the inner one.

Print without New Line in Python

To display strings in Python, you can print them into the console using the built-in print() function.

Printing the strings this way introduces a new line.

Meanwhile, this is intuitive, it is not always what you want.

To make Python stop adding new lines when printing, you can specify another parameter inside the print() function.

This parameter is an optional parameter called end. It specifies the last character after printing the string.

By default, the end parameter is a newline character, that is, “\n”.

This is why there is always a new line after a print() function call.

But you can change the end parameter to whatever you want.

To not want to introduce a new line, replace the end with an empty space ” “.

This results in both strings being printed on the same line:

As another example, let’s set the end parameter such that a print() function call ends with 3 line breaks:

This results in 3 new lines being printed in-between the two prints:

Now you know how to print strings on the same line in Python.

To be more formal, you now understand how to change the default end character of a print() function call.

Alternative Ways to Print on Same Line in Python

Let’s finally go through some alternative approaches to printing strings on the same line in Python.

This means you can give it as many arguments as you want, and it will print them all into the console.

If you print multiple elements in the same print() function call, there will be no new lines added.

Instead of adding a new line, a blank space is added. This makes printing multiple items in a single call behave in an intuitive way.

Join the Strings Before Printing

Another way to print strings on the same line in Python is by utilizing the string join() method.

The join() method follows this syntax:

Where separator is a string that acts as a separator between each element in the elements list.

For example, you can join two strings by a blank space to produce one long string and print it.

However, technically this is not printing on the same line. Instead, we combine two strings into one string and print it as a single string.

Now you know a bunch of ways to print strings on the same line in Python.

Last but not least, let’s see how things work in older versions of Python 2.

How to Print on the Same Line in Python 2.x

In Python 2 print is not a function but a statement.

To print on the same line using Python 2.x, add a comma after the print statement.

Today you learned how to print on the same line in Python.

To recap, the print() function adds a newline character to the end by default. This means each print() call prints into a new line.

To not print a new line, you can choose one of these three options:

All String Methods in Python

Hi, I'm Artturi! I'm an entrepreneur and a blogger from Finland. My goal is to make coding and tech easier for you.
All Posts »
PrevPreviousPython Coin Toss Program
NextPython Print without ParenthesisNext