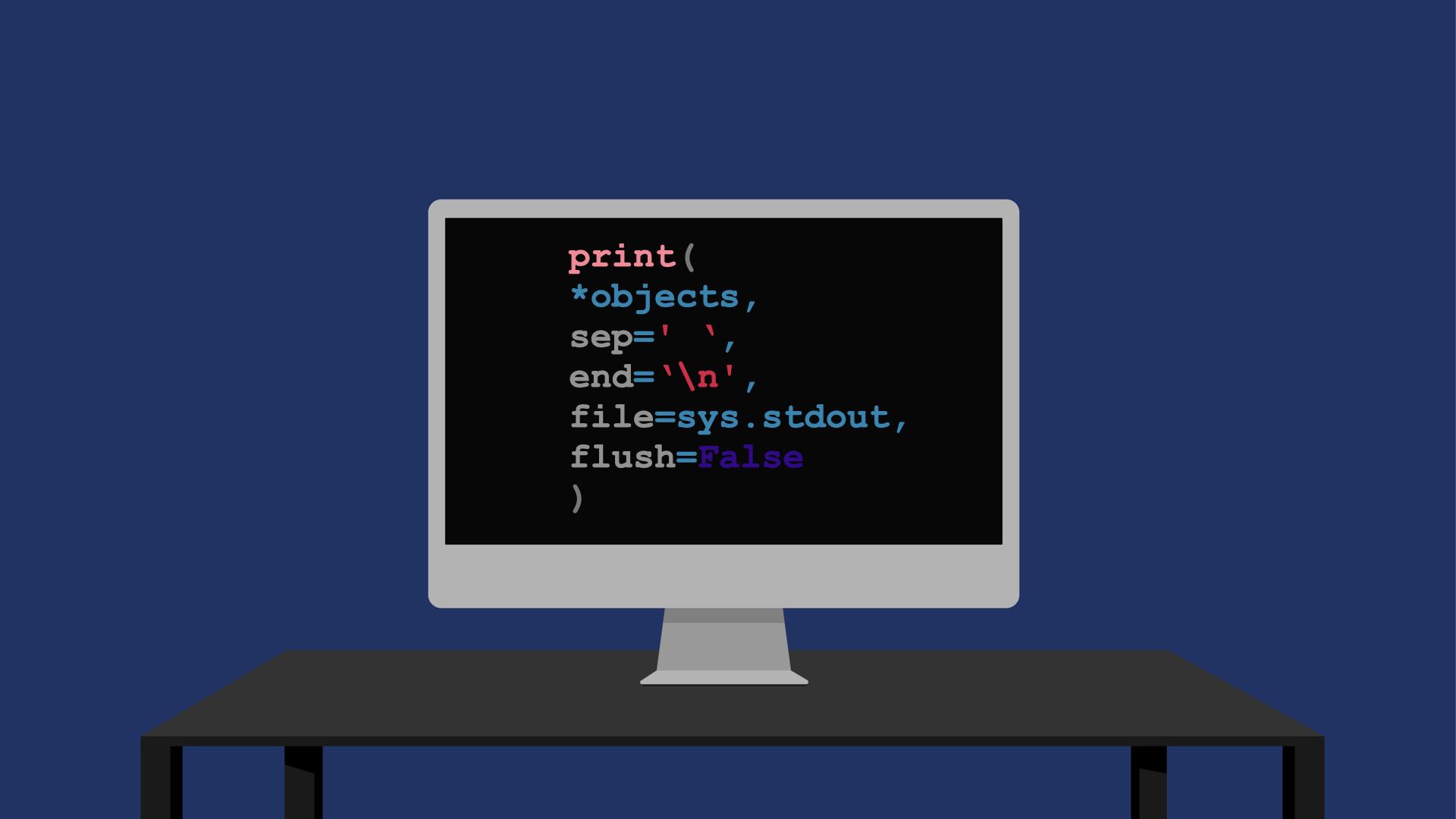 The print function parameters are:

In the above, only the first argument *objects is mandatory. The rest of the arguments are not.

In this guide, you will learn what each of the print parameters means and when to use them.

You have probably used Python’s print() function this way:

Or even like this with an arbitrary number of arguments:

But according to the official documentation, the print() function follows this syntax:

There seem to be 5 arguments that the print() function accepts. This may cause some confusion, so let me show you how what each of these arguments does, and when they are useful.

The *objects parameter represents an arbitrary number of arguments. This makes it possible to call the print() function any number of inputs. This is why there is an asterisk * in front of the argument name. If there was no asterisk, you could only print one element at a time.

The separator parameter sep acts as a separator if the print() function is called with multiple values. By default, this is set an empty string, ‘ ‘.

For instance, let’s separate each element by two new lines:

The separator is useful if you want to customize the way multiple values are printed into the console.

The end parameter specifies the string/character to which the printed value ends. By default, it is a line break.

If you do not want each print to cause a new line, you can change the value of the end parameter in the print() function call.

For instance, let’s use a blank space instead of a new line:

Tweaking the end parameter in the print() function can be useful if you want to change the way consecutive prints appear in the console.

By default, the print() function displays the output in the console. But this is just one stream where the output can be displayed. You can for example print the results into a separate text file. To do this, specify the file parameter.

For example, let’s print a string to a new file called example.py:

As a result, you will not see a print in the console. Instead, the string is printed to the file called example.txt in the same folder with your project.

But why would you ever do something like that?

In Python, the input/output functions, such as print(), are expensive to call. To improve the performance, your operating system stores input/output data into a buffer before sending it to the stream, such as into the console.

When you print in Python, the data is piled up into a buffer until there is a line break. When a line break occurs, the printed data is sent to the console.

Sometimes this can cause headaches.

Let’s demonstrate this via an example where we build a count-down timer. This timer works such that it prints numbers 3, 2, and 1 one second apart from one another and then prints “Go” at the end like this:

As you know, calling print() function automatically adds a line break at the end. To make the counter work, however, you do not want line breaks. Instead, you want to display … between each second, so you need to replace the automatically added line break with three dots.

Here is how you would probably implement the counter described above:

But if you run this program, you notice it waits for 3 seconds and only then prints the whole thing in one go.

This is not what we want.

This problem occurs because of the absence of line breaks. As you learned, the operating system optimizes the print() calls by buffering them until it sees a line break. The first line break in the above code happens only on the last line print(“Go”). Until this, the buffer stores all the printed items, and nothing appears in the console.

To overcome this issue, you need to tell the operating system not to buffer subsequent print() function calls. In other words, you want to flush the buffer every time you call print().

To do this, simply set flush=True into the print() function call:

Now if you run the program, you will see the countdown timer work as expected.

Today you learned about the parameters of the print() function in Python.

Hi, I'm Artturi! I'm an entrepreneur and a blogger from Finland. My goal is to make coding and tech easier for you.
All Posts »
PrevPreviousWhat Is [::-1] in Python?
NextHow to Implement a Progress Bar in PythonNext