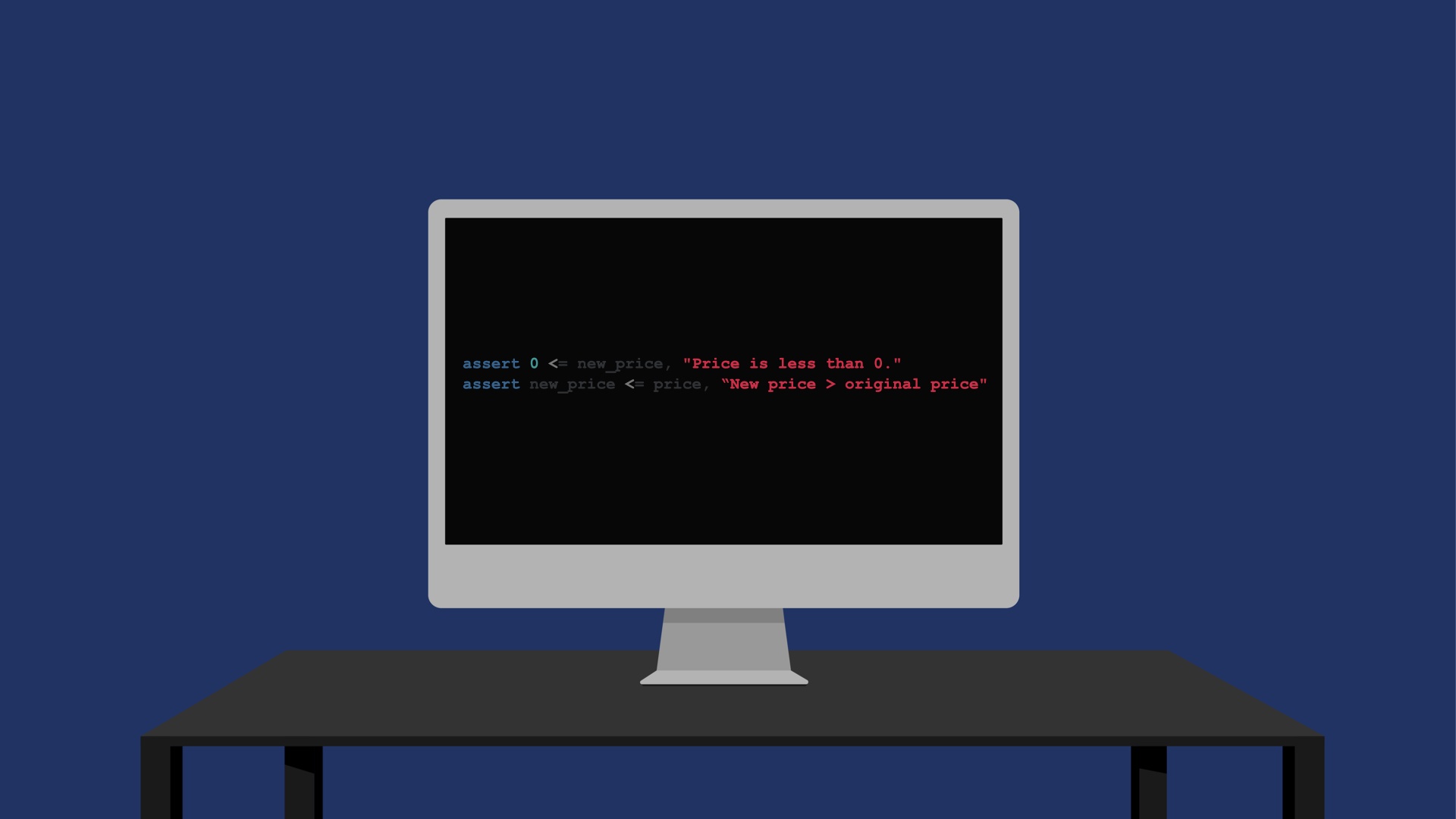 Assert statements in Python make sure a condition is met before continuing the execution of the program.

For example, let’s assert that a discounted price does not go below 0 nor surpass the original price:

Calling this function with an input that makes the assertion fail will lead to the code crash with a clear error:

You should only do assertions when debugging your code. Do not leave assert statements in a production environment.

In this guide, you will learn how to adapt assertion as one of your debugging routines. You are going to see some real-life use cases of assertion in Python. And you will also see an example of when assertion can be really dangerous.

Debugging code helps you track down bugs that cause issues.

When you debug a program, there are times when you want to test for specific conditions. More specifically, if the condition is not met, the program should throw an error instead of continuing. This way you can narrow down the root cause of a bug and save your time when debugging code.

You can use Python’s built-in assert statement to debug your code.

Assertion informs a developer of an unrecoverable error. Thus, the assertion is not intended to point out regular error conditions like “File not found”.

If a condition you assert is True, the program continues. If the condition evaluates False, an error called AssertionError is thrown.

If your program code has no bugs, these impossible conditions never become True. But if one occurs, the program crashes with an AssertionError telling you exactly which “impossible” condition was triggered.

Thus assertion makes it much easier to track down and fix bugs in your programs.

Use Assertions Cautiously in Python

Use assertions cautiously, only when debugging your code.

Assertion helps you find the root cause of a bug. Unlike regular runtime errors in Python, assertions have to be manually defined by a developer. So the assertion is not a regular error handling procedure.

It is possible to disable assertion statements when using a Python interpreter. Thus there can be problems if you rely on assertions, because they may not be triggered at all.

The assert Statements in Python

The assert statement checks if a condition evaluates True.

In Python, assert is a reserved keyword. It follows this syntax:

Where the two parameters are:

Using assert is roughly equal to the following if statement:

The only difference is that assert statements can be disabled by running the program with an -O flag.

Even though this is a subtle difference, it highlights why you should only use assertion in debugging. If the debug mode is disabled, assertions do not get triggered, and the code with potential bugs is free to execute.

This function takes a price of an item and a discount percentage as a fractional number.

In this function, the assert statements make sure:

Now, let’s test how it works by calling the discount() function:

So it seems to work as we intended.

Now, let’s input an invalid discount to the discount() function.

As you know, it would make no sense to give a discount that is more than 100%, or 1.0 when talking about fractional discounts.

As you see from the above traceback, applying an invalid discount crashes the program with an AssertionError. With the help of this assertion error and the traceback, it is easy to track down what went wrong in our code.

In this case, it is the new price that dropped below zero, which means the discount was too high.

This is how the assert statement can really help you debug your code.

It may seem like the assert statement and the if statement does the same thing. They both check if a condition is True or False.

But there are key differences between assert and if statements in Python:

The point of assertion is to track down bugs and impossible conditions in your program with relative ease.

If you assert multiple conditions in a single assert statement, you only make the job harder. This is because you cannot determine which one of the conditions caused the bug.

If you want your assertion message to expand to multiple lines:

Be careful with parentheses and assert. In Python 3, assert is a statement, not a function. Thus it does not take parenthesis.

Instead, you should use it without parenthesis like this:

The reason why the parenthesis-version does not work is the assertion always evaluates True. This is because, in the boolean context, any non-empty tuple evaluates True.

As a result, if you write the assert statement with parenthesis, you are essentially writing assert(True).

The only way you can use parenthesis with the assert statement is by wrapping the condition to parenthesis but leaving the message out.

This assertion works fine because the assertion is not applied to a tuple. Instead, it is applied on the condition.

Assertions Are Not for Data Validation in Python

This is not a mistake by Python developers. Instead, it is an intentional decision. It is really dangerous to use assert as a shorthand way for data validation.

Imagine you’re building a social media app with Python. Somewhere in the code, you want to remove users as an administrator of the app. To do this, you assert that the current user is the administrator that has the privilege to delete users before actually deleting one.

If you now take a closer look at this function, what do you think happens when the assertions are disabled?

It causes a serious issue.

Any user can delete any account given a user ID. This happens because the admin check is now a null operation due to assertions being disabled.

This kind of behavior would be catastrophic for your application.

But how can you avoid it?

Do not use assertions to do data validation. You can use a regular if statement instead.

This approach is also better as it:

How to Disable Assertions in Python

You can disable assertions in Python by executing your program file with the -O flag. This sets the __debug__ to False.

For instance, given a Python program in a file called example.py you can disable the assertions by running the code with:

Now no assert statements are triggered regardless of whether there was a bug or not.

The assert statement in Python is meant to debug your code—not to handle runtime errors.

An assert statement can be thought of as a sanity check. It helps developers make sure what they think is true really is true.

Hi, I'm Artturi! I'm an entrepreneur and a blogger from Finland. My goal is to make coding and tech easier for you.
All Posts »
PrevPreviousWhat Is Programming? [Beginner’s Edition in 2022]
NextSwift How to Get an Index of an Item in an ArrayNext